Whenever I ask people if they have ever heard of Wawa, they think I’m speaking jibberish. When people actually know about it, they say “Yeah, it’s kind of like a Cumby’s.” UM THAT’S OFFENSIVE. Wawa is the king of convenience stores. It has ordering monitors where you can customize hoagies (we will get to those in a second), drinks, snacks, desserts, etc. Aside from the fun touchscreen ordering process, Wawa has the best OG iced tea, pretzels, and breakfast sandwiches. Most Wawas now are Super Wawas, meaning they are both gas stations and convenience stores. Where I grew up, there is a Wawa on almost every corner and there are 11 within three miles of my childhood home. 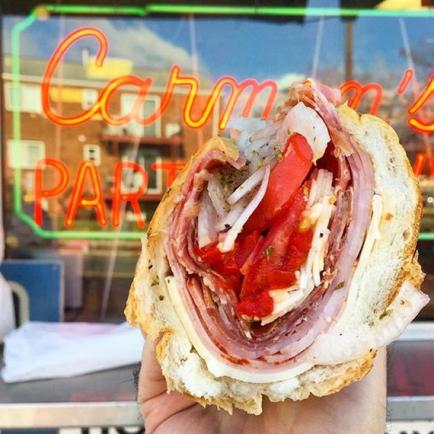 Growing up outside of Philly was a privilege solely for the food. I refuse to order a “steak and cheese” (as some people up here would call it *eye roll*) anywhere but Jersey or Philly. Jersey and Philly are not only known for their cheesesteaks, but also for their hoagies. People up here swear a “sub” or a “hero” is a hoagie. They only think that because they have never had a real hoagie from Carmen’s or Cacia’s or Matt and Marie’s. I really think it all comes down to the roll. It’s been eight years and my mom and I still have yet to find a bakery that makes decent sandwich rolls.

Like people in Connecticut, I grew up eating your typical calzones and strombolis. But  in Jersey, there is something called a “panzarotti” on every pizza menu as well. When I ask people up here if they know what a panzarotti is, they usually wonder if it is a type of car. Little do they know it is one of the most delicious types of food ever and I crave them all the time. I am also always constantly craving Philly soft pretzels. I know soft pretzels exist up here, but nothing like an OG Philly soft pretzel.

I had no idea that in the rest of the country people pump their own gas. In Jersey, that is completely unheard of. Although I learned to drive here in Connecticut and have gotten used to pumping my own gas, it is always a sweet surprise filling up in Jersey knowing I don’t even have to get out of my car. However, I’m still not sure if the pump attendants are supposed to get tipped…

I understand that the coast of Connecticut is the Long Island Sound so there really isn’t room for any improvement beach-wise. BUT, Connecticut could still make an effort to make its beaches somewhere that people want to go instead of Rhode Island. Growing up, I was so oblivious to how spoiled I was living an hour from “The Shore.” I never fully appreciated the day trips to the beach, the night trips just to the boardwalk, and the week-long vacations that felt like an escape to a whole different world. I just thought everyone was lucky enough to live so close to somewhere so beautiful. Connecticut could step up their game by building boardwalks, creating destination attractions like amusement parks and restaurants, and by giving residents a more vacation-like experience.

Of course there are plenty of things I love about Connecticut that Jersey doesn’t have. Like… well… um… hm… I just can’t… think of any… right now… However, there is one recent Jersey-esque change to Connecticut that I have been waiting for for years: Chik-fil-A!!! Chik-fil-A is one of the my fav fast food restaurants and it makes me so happy to finally see them popping up all over Connecticut. Now I can eat more chikin (except on Sundays).